This blog is PR friendly! I would LOVE to review YOUR product and/or host a giveaway. Contact me at: kpacheco at gmail dot com 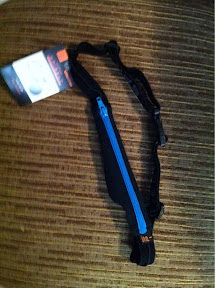 I contacted SPIbelt to see if I could do a review of one of their belts. Debbie Pagell responded to my e-mails, and she was soooo WONDERFUL to work with! Not only did she say yes to allowing me to do a review, but she had me go onto their website and choose which belt I wanted. Down to the last detail of color!
I chose the Water Resistant Energy belt in turquoise.

After running a half marathon in the rain a week prior to ordering this belt, I felt like I wanted to have a water resistant belt to try out! 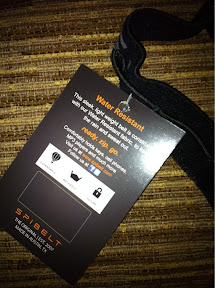 Here is SPIbelts description of this belt:
Light Weight and lean, yet protective. Using our same sweat proof material as our specialty armband, this belt makes a great companion for you heavy sweat types, or those who like to play hard! 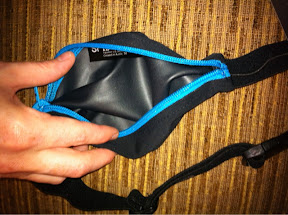 The loops for the energy gels. This was important to me. I currently have a belt that did not have the loops on the outside for the gels, and I felt like having the gels and everything else in the pocket was just too bulky! Problem alleviated! 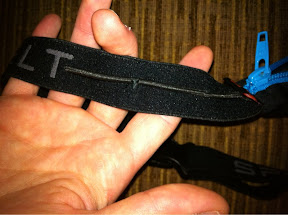 You can barely see the belt! 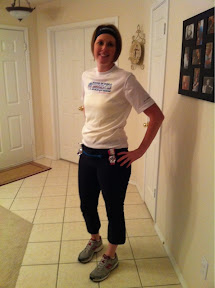 Close up of the gels in the loops. 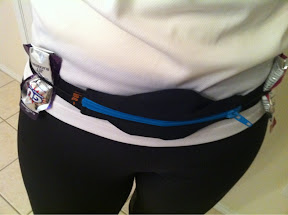 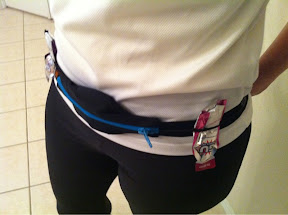 I typically turn the belt so that the pocket is in the back, and then my shirt will cover it. You don't even feel it on you! 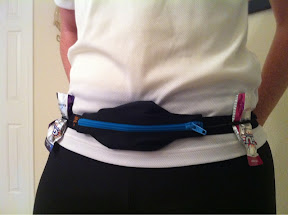 Stretching it out...even a larger person can wear one! 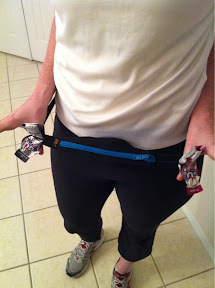 I LOVED this SPIbelt! I'm definitely planning to wear it again! I actually took the belt and ran it under water, and it did it's job! No water got into the inside of the pocket! Like I mentioned, I typically turn my belt around so that the pocket is in the back. Having the gel loops on the side made it so much easier for me not only to grab while I was running, but also to access the other items in the pocket.
I wear the belt pretty low on my hips. I don't like it on my waist. Other belts that I've tried out have somehow made their way back up to my waist...but the SPIbelt stayed put! It didn't move! Stayed on my hips the entire time.
Thank you SPIbelt for being soooo awesome!
Now, onto some fun! YOU can have your very own SPIbelt! The people at SPIbelt are very generous and are allowing you to have the same experience that I had! You will work with Deb, to pick out the SPIbelt that is right for you!
Mandatory:
Optional:
That's up to 7 entries! I'll use random.org to choose a winner on June 2.
* SPIbelt did not pay me in any way to write this review. They solely sent me the belt to test out.

Thank you Kirsten @ Mom!...Honey!...Coach!...SisterRunner for the awesome surprise goodies giveaway! I received the package on Thursday and loved it all! We went on a road trip to see my SIL graduate from college this weekend, so I used the lunch box to bring snacks in. We ate the Reeses on the way, along with the gum. I used the chapstick on my run yesterday morning and I started reading the book while on the road trip! Thanks again! 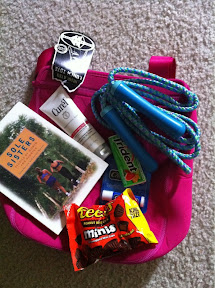 Oh, and check out this giveaway, but don't enter b/c I want to win!
Posted by Kristen at 6:35 AM 2 comments:

I had fun at the Heels and Hills Half Marathon, despite the weather!
I set up all of my stuff the night before so I'd be ready. I was sure not to forget my chip timer this time!

I woke up nice and early to get ready. It was decided that I would be the driver to this race (Positive A and I switch up for each race!). Quick pose for the camera in my 'traditional' pose...
I picked Positive A up and then went on to pick up Casey! Off we went! We made it to the race site with plenty of time. We got a good parking spot, and only had to walk a few minutes to the race start area.
We got some random person to take a picture of us. I REALLY like this picture of the 3 of us!

Some random fun pictures from before the race.

We met up with someone that I only knew through blogging, Lori, over at Off to a Running Start. Casey has known her for a long time. It was really nice to put a face to a name!
We made it to the race start. Off we went!

Casey had a set plan to run 3 minutes then walk 3 minutes for as long as she could. Positive A and I decided that we were going to *try* to stick with the 2:25 pacing group. That lasted until about the first water stop at around 2 miles. They ended up pretty far ahead of us and we never really saw them again after that. We stuck to a 10:30ish mile pace while running, and then walked for just a little bit at the start of each mile. We lost Casey & Lori pretty quickly. Around mile 3 or 4 I ran into a friend from church who was running the 10k.
Right at the beginning, it started raining. Then it stopped. Then it started again. It rained pretty heavy for just a bit but it mostly drizzled for the entire run. I warmed up pretty fast, and the first 4 miles felt great. Miles 4-6 were rough for both Positive A and myself, and we aren't really positive why, though I think it was b/c the wind was pretty rough and we were almost running against it. We were still keeping the pace that we wanted, but I felt like we were giving a much greater effort to keep it than it should have taken.
We made our loop around and headed back.
I ran ahead and snapped a picture of Alison...

We then came up to the 10 mile marker...where I take my traditional picture...
At this point someone at one of the aid stations that we were passing stopped us and told us that we should take cover under the gazebo thingy that was there b/c hail was coming and the race was paused. PAUSED. Seriously? Who pauses a race? Alison and I contemplated stopping, but they had no way of getting us back to our cars...so we were gonna have to run at some point. So, since we only has 3.1 miles left, we decided to just go for it. It wasn't really raining, we didn't see any lightning and it wasn't hailing at that point. So on we went!
I was wearing my Garmin, and I was soooo happy that I did, b/c we saw the 13 mile marker earlier than expected. Alison and I finished the race, but my Garmin said that we only ran 12.45 miles.
We got our medals right as we crossed the finish line.
We then felt cheated, so we decided to turn around and run the last bit of the race. We ran back up the street, turned around and ran back...and crossed the finish line again.
Alison and I went to eat a quick snack and drink some water while waiting for Casey to finish.

Casey texted me to let me know that she was almost done, so Alison and I went back up the race route to meet her to finish with her.
By the time that we got to the car, the temperature had dropped significantly. I was FREEZING. The wind was HORRID. We were all STARVING. I called up my hubby and him and my boys came to meet us at Olive Garden to eat some food!
That's my re-cap! I also wanted to mention that I am sooooo proud of and happy for my friend Casey. She's awesome. This was her first half marathon, but it was very special to her and marked a special time in her life b/c she is recovering from Lyme's Disease. Just 1 year ago, she was practically bedridden and using a walker or wheelchair to get around. Today she crossed the finish line into recovery. Follow her journey here
Posted by Kristen at 8:05 PM 7 comments:

Thanks for all your entries! It was a fun first review and giveaway!

I went to random.org and here is the result:

Please contact me @: kpacheco@gmail.com to claim your new Sweaty Band, and don't forget to thank Sweaty Bands on facebook!
Posted by Kristen at 2:57 PM 3 comments:

On April 23, Casey, Positive A, and I ran the 2nd annual Running Moms Rock 5k.

It was an evening race...started at 5:00 pm. I LOVE the tech shirt that we got! I'll definitely be wearing it again!

I wore a skirt for the first time!

The weather was a little warm...and since I'm a fairly new runner, I've never run in the heat before. The course was a bit twisty at first, but by the end it straightened out. They put on a really good race.

There was a live band at the finish, along with water and various vendors giving stuff away. They also had a a bunch of things for the kids to do...face painting, photo booths etc. My hubby stayed home with my boys, but Casey's hubby and kids went, and had a really good time.

I had been feeling sick earlier in the day and when the race was over, I actually was feeling pretty bad. I had some cramping and just felt very nauseated. I didn't PR, but I think that was b/c of the heat...I was so out of breath!

I know this is kind of a late post, but I've been SUPER busy...so, you will just have to read it now!

I had initially signed up for the 10k, but my training that week wasn't that great :-(, so I ended up switching to the 5k. I had fun completing it, and am going with a 34:37 time. Thanks Jess for hosting this virtual race!

Stay tuned for the Running Moms Rock 5k & the Heels and Hills Half Marathon race recaps...they are a'comin'!
Posted by Kristen at 9:20 AM 5 comments:

I'm all set and ready to go tomorrow morning! I'm super excited for this half marathon! 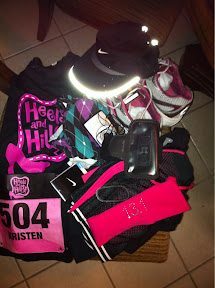